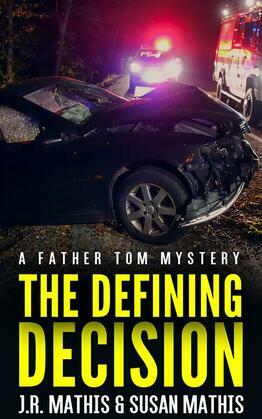 Father Tom Greer and Detective Helen Parr are deeply in love. Unwilling to break his vows of celibacy and chastity, they’ve been determined to forge a relationship based on friendship and affection only, never giving in to their physical attraction to each other.

After receiving news that the Church has decided to allow priests in certain circumstances to request a dispensation to marry and remain in the priesthood, Father Tom and Helen are patiently waiting to hear if he’s been given permission by the Pope. Aided by Anna, they begin to date secretly and discuss what their life together might look like.

But when Chad Hudson, Chief of Staff to Myer College President Richard Davenport, is struck and killed by a van driven by Gladys Finklestein, Father Tom and Helen are soon pulled into a murder investigation--with Gladys as the prime suspect.

As they investigate, they learn more about Gladys’ past as Richard Davenport’s teenage lover. About what happened that led her to end their relationship. And why Gladys had a public argument with Chad days before his death.

Then, Father Tom finds a connection between this accident and another accident sixteen years earlier . . . the one that cost Gladys her parents and the ability to walk.

As Helen helps her learn the truth about her parent’s death, Tom helps Gladys come to terms with her past choices--and to understand what her future could be.