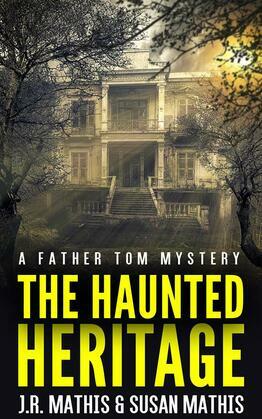 Excitement is building as the opening of the Acutis Society’s Fairy Tales and Frights haunted house approaches. The members of Saint Clare’s gaming group have worked hard to transform the interior of the Myer Mansion into something both magical and scary to entertain the families of Myerton as Halloween approaches.

But does an actual ghost walk the halls of the 170 year old house?

After Nate writes an article for the Myerton Gazette claiming that that ghost of Victoria Myer haunts the mansion, Father Tom wants a retraction--until the story is picked up by the Baltimore paper and ticket sales go through the roof.

When he finds Catherine Conway in an upstairs room talking to someone he can’t see--a woman asking for a priest to say Masses and prayers for her soul--Father Tom comes to the only conclusion possible.

Victoria Myer still lives in the house. And she’s suffering the torments of purgatory.

But when one of the participants in the house is found stabbed to death, Father Tom and Helen must search for an earthly killer before he strikes again.