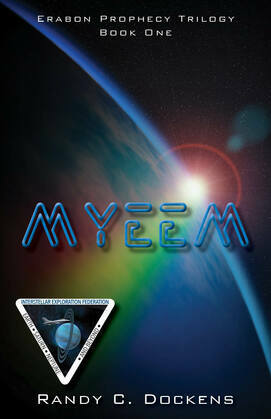 by Randy C Dockens (Author)
Buy for $3.99 Excerpt
Fiction Science fiction Adventure Christian Futuristic
warning_amber
One or more licenses for this book have been acquired by your organisation details

After an interstellar gate accident above Neptune propels an astronaut, nicknamed Nuke, so far into the universe there is no way for him to return, he finds himself the key to an alien prophecy.

On Myeem, the alien planet on which he first arrives, Nuke finds its citizens look vastly different from him. Relations are tense at first, but he makes friends with an influential Myeemian who comes to believe he is the prophetic forerunner to the return of their deity, Erabon, and charge him with the arduous task of reuniting the clans living on six different neighboring planets. Yet not all are so willing to trust him to that task.

It dawns on Nuke that he is the actual alien in his story, and he finds it difficult to fit into their culture both on Myeem as well as the second planet, Eremia. He does become close to one Myeemian and discovers there are certain customs that eerily parallel those of his heritage. But how would that be possible? What does it mean? Is it a key for Nuke to possibly return home through the interstellar gate? Or does he need to accept that living among an alien culture is now his fate?

Myeem is the first book of a unique Christian science fiction series entitled Erabon Prophecy Trilogy by futuristic fiction author Randy C Dockens. If you enjoy the metaphorical imagery used by the great C.S. Lewis in several of his writings, you will enjoy this series as well.

Get your copy of Myeem and let your imagination soar in this exciting new twist to Christian science fiction today!