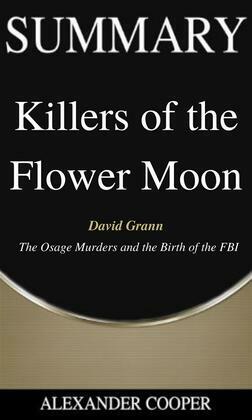 Summary of Killers of the Flower Moon

Summary of Killers of the Flower Moon

David Grann’s Killers of the Flower Moon: The Osage Murders and the Birth of the FBI recounts how Tom White, an FBI investigator, straddled the divide between the old Wild West-style law enforcement and its new Progressivism movement predicated on rational, evidence-based, scientific investigation. In Osage County, Oklahoma, Tom White is tasked with solving the Osage murders case, in which twenty-four Osage individuals were suspected of being murdered, but nobody could figure out who or why these killings were happening. The case was four years old, and the Bureau of Investigation—still in its early years, and later transformed into the FBI—was under a lot of pressure to solve it, especially with a new, ambitious director named J. Edgar Hoover at the helm. He would go on to preside as director of the FBI (and Bureau of Investigation) for forty-eight years. At the time, however, Hoover was anxious to solve this troubling case and used its success as a springboard toward launching the Federal Bureau of Investigation’s genesis myth.

Tom White leads a team of undercover agents into Osage County, carefully eliminating suspects and probing witnesses until he discovers that William K. Hale, the “King of the Osage Hills,” is pulling countless local strings to deviate the investigation away from him. What follows is a breathtaking account of a true story filled with corruption and crime—a raw story of how law enforcement can bring out the rawness and depth of (in)humanity.

Here is a Preview of What You Will Get:

Get a copy of this summary and learn about the book.