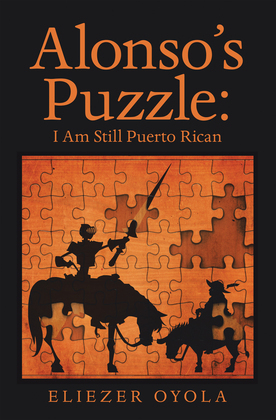 by Eliezer Oyola (Author)
Buy for $3.99 Excerpt
Fiction Nonfiction Literary collections Essays
warning_amber
One or more licenses for this book have been acquired by your organisation details

“Alonso’s Puzzle” is a curious amalgam of fact, fiction, and philosophy. It oscillates between a memoir and a confession. The narrative follows the adventures of a man named Alonso. Alonso is the alter ego of Cervantes’ “Don Quixote.” Before losing his wits, the character’s name was Alonso Quijano el Bueno.

Both Spanish and English are used, and the narration is nonlinear; thus, “Alonso’s Puzzle.” The subtitle “I Am Still Puerto Rican” is an allusion to Esmeralda Santiago’s “Cuando era puertorriqueña.”

The various pieces of the puzzle seem to suggest the various periods of life, or the places lived. The missing piece is the protagonist's death. The image on the front cover is the work of the author's granddaughter, Miriam Moshe Cooper.