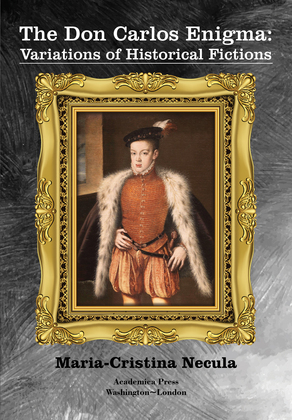 by Maria-Cristina Necula (Author)
Buy for $23.20 Excerpt
Nonfiction Literary essays Social science Political science History <1799
warning_amber
One or more licenses for this book have been acquired by your organisation details

The death of Spain’s Don Carlos, Prince of Asturias, on July 24, 1568, remains an enigma. Several accounts insinuated that the Spanish Crown Prince was murdered while incarcerated by order of his father, King Philip II. The mystery of Don Carlos’s death, supported by ambassadorial accounts that implied foul play, became a fertile subject for defamation campaigns against Philip, fostering an extraordinary fluidity between history and fiction. This book investigates three treatments of the Don Carlos legend on which this fluidity had a potent, transformational impact: César Vichard de Saint-Réal’s novel, Dom Carlos, nouvelle historique (1672), Friedrich Schiller’s play, Don Karlos, Infant von Spanien (1787), and Giuseppe Verdi’s opera, Don Carlos (1867). Through these cultural variations on a historical theme, the authors and composer contributed innovative elements to their genres.

In The Don Carlos Enigma, the exciting young scholar Maria-Cristina Necula explores how the particular blend of history and fiction around the personage of Don Carlos inspired such artistic liberties with evolutionary outcomes. Saint-Réal advanced the nouvelle historique genre by developing the element of conspiracy. Schiller’s play began the transition from the Sturm und Drang literary movement towards Weimar Classicism. Verdi introduced new dramatic and musical elements to bring opera closer to the realism of dramatic theatre. Within each of these treatments, pivotal points of narrative, semantic, dramatic, and musical transformation shaped not only the story of Don Carlos, but the expressive forms themselves. In support of the investigation, selected scenes from the three works are explored and framed by an engagement with studies in the fields of French literature, German theatre, French and Italian opera, and Spanish history. The enigma of the Spanish prince may never be solved, but Saint-Réal, Schiller, and Verdi have offered alternatives that, in a sense, unburden history of truth that it could never bear alone. In the case of Don Carlos, history is in itself an encyclopedia of variations