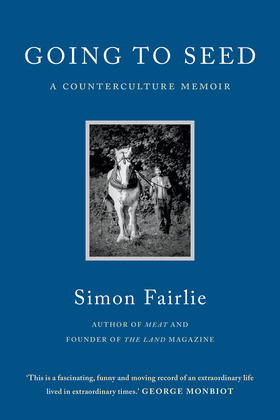 "Simon Fairlie is possibly the most influential—and unusual—eco-activist you might not have heard of."—The Observer

An unforgettable firsthand account of how the hippie movement flowered in the late 1960s, appeared spent by the Thatcher-consumed 1980s, yet became the seedbed for progressive reform we now take for granted—and continues to inspire generations of rebels and visionaries.

"Fairlie has a refreshingly declarative style: he’s analytical, funny and self-aware. . . His memoir has much to offer anyone interested in movement history or in the future of intentional communities."—Elizabeth Royte, Food & Environment Reporting Network

At a young age, Simon Fairlie rejected the rat race and embarked on a new trip to find his own path. He dropped out of Cambridge University to hitchhike to Istanbul and bicycle through India. He established a commune in France, was arrested multiple times for squatting and civil disobedience, and became a leading figure in protests against the British government’s road building programs of the 1980s and—later—in legislative battles to help people secure access to land for low impact, sustainable living.

Over the course of fifty years, we witness a man’s drive for self-sufficiency, freedom, authenticity, and a deep connection to the land.

Fairlie grew up in a middle-class household in leafy middle England. His path had been laid out for him by his father: boarding school, Oxbridge, and a career in journalism. But everything changed when Simon’s life ran headfirst into London’s counterculture in the 1960s. Finding Beat poetry, blues music, cannabis and anti–Vietnam War protests unlocked a powerful lust to be free. Instead of becoming a celebrated Fleet Street journalist like his father, Simon became a laborer, a stonemason, a farmer, a scythesman, and then a magazine editor and a writer of a very different sort. In Going to Seed he shares the highs of his experience, alongside the painful costs of his ongoing search for freedom—estrangement from his family, financial insecurity, and the loss of friends and lovers to the excesses and turbulence that continued through the 70s and 80s.

Part moving, free-wheeling memoir, part social critique, Going to Seed questions the current trajectory of Western “progress”—and the explosive consumerism, growing inequality, and environmental devastation laid bare in our daily newsfeeds—and will resonate with anyone who wonders what the world might look like if we began to chart a radically different course.