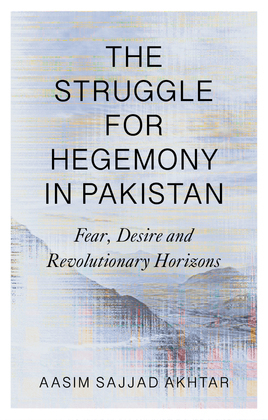 The Struggle for Hegemony in Pakistan

The collapse of neoliberal hegemony in the western world following the financial crash of 2007-8 and subsequent rise of right-wing authoritarian personalities has been described as a crisis of 'the political' in western societies. But the crisis must be seen as global, rather than focusing on the west alone.

Pakistan is experiencing rapid financialisation and rapacious capture of natural resources, overseen by the country's military establishment and state bureaucracy. Under their watch, trading and manufacturing interests, property developers and a plethora of mafias have monopolised the provision of basic needs like housing, water and food, whilst also feeding conspicuous consumption by a captive middle-class.

Aasim Sajjad-Akhtar explores neoliberal Pakistan, looking at digital technology in enhancing mass surveillance, commodification and atomisation, as well as resistance to the state and capital. Presenting a new interpretation of our global political-economic moment, he argues for an emancipatory political horizon embodied by the ‘classless’ subject.