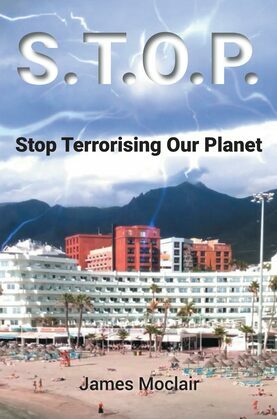 Stop Terrorising Our Planet
by James Moclair (Author)
Buy for $6.80 Excerpt
Fiction Science fiction Adventure
warning_amber
One or more licenses for this book have been acquired by your organisation details

For several years now the world as we know it had completely changed. This was because of the Covid 19 virus. With this in mind, Brian Jameson and his family had held back on taking a holiday abroad for quite a few years.

B.J as he was known to all his friends, decided with his twenty-fifth wedding anniversary just around the corner, he would surprise his wife Shelia and book an all-inclusive ten-day holiday to the Canary Island of Tenerife. For B.J and Shelia, this will be the holiday of a lifetime and a chance for some fun in the sun and a nice bit of romance. And the icing on the cake was, this was the first time they were going on holiday without their now two grown-up girls.

What B.J and the world weren't prepared for happened after only one day and night into the Jamesons' idyllic holiday. In short, Tenerife became an absolute killing field, and mysteriously, the majority of the murders were committed by tourists.

It turned out Tenerife was just a testing ground. Soon another country would become the target of bizarre weather events that pushed the boundaries of the laws of physics and even crossed into the paranormal realm.

Out of the ashes of the catastrophe that not only destroyed B.J's but everyone's lives who were on the island Tenerife, an odd alliance was also formed. More bizarrely, this alliance was between B.J, a physics lecturer, a gangland boss, a spiritualist, and various government departments from around the world. For B.J and his team, they knew the clock was ticking. Globally, bodies were stacking up and soon without intervention, this unknown force would be unstoppable.