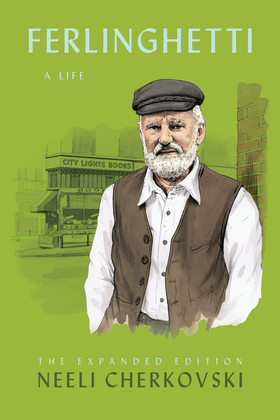 “No one mulling this gentle record will fail to be moved.”
—San Francisco Chronicle

Poet, publisher, bookseller, activist—this is the story of Lawrence Ferlinghetti, the bookshop he made a landmark in San Francisco, and a life beautifully lived with writers and books.

In the mid-1950s a group of San Francisco-based writers emerged as a central force in American letters. Self-styled bohemians, disillusioned with the old American dream of prosperity and conformity, they harangued these “virtues” in their writings. They became known as the Beat Generation. Their ranks included Allen Ginsberg, Jack Kerouac, and Gregory Corso. But the unifying force among them was an unassuming, almost painfully shy young poet named Lawrence Ferlinghetti.

As owner of the now legendary City Lights Booksellers and its publishing enterprises, City Lights Publishers and its Pocket Poet Series, Ferlinghetti promoted the writings of his rebellious contemporaries, and continually looked for new talent to publish, while conducting a parallel though more personal search for self-identity through his own work. Although that search began with a lonely, unstable childhood in which he never knew his real parents, it would not become manifest until years later with the 1958 publication of his first collection of poems, A Coney Island of the Mind—that debut would go on to sell more than one million copies and become one of the bestselling and most popular books of poetry ever published.

In this, the first biography of Ferlinghetti ever published (originally released in 1979), Neeli Cherkovski recreates those early years of the poet-publisher and examines the content and import of his work. Long out-of-print, this is a crucial literary document by a man who knew the legendary poet-publisher-bookseller intimately.

This expanded edition—published just one year after Ferlinghetti’s passing in 2021 at the age of 101—includes a fascinating, hilarious new foreword about how the book came to be written in the late 1970s, an epilogue covering the last forty years of Ferlinghetti’s life, and a personal, tender afterword about the long relationship between the author and his subject.

For readers interested in American culture and how a business can make social change, this is an irresistible story of a long life very well lived.