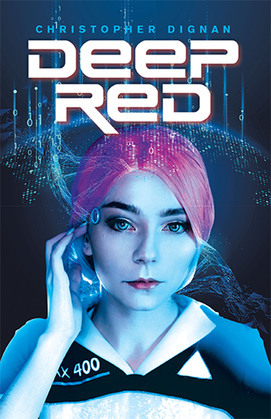 by Christopher Dignan (Author)
Buy for $0.99 Excerpt
Fiction Science fiction
warning_amber
One or more licenses for this book have been acquired by your organisation details

We are at the dawn of the 22nd century. The United Nations agree to allow Deep Red – a brilliant supercomputer – to control the world’s entire nuclear arsenal. Deep Red’s prime directive is to protect humanity, even from itself. Her other duties include finding concrete solutions to the desperate plights of humanity.
Indeed, by the year 2100, many of planet Earth’s natural resources are nearly depleted. Food and fresh water are scarce, and overpopulation is causing major pollution and sanitation problems. Soon, an unidentified mutant virus appears and ravages the island of Borneo.
Deep Red is the creation of mastermind Professor Sutton Lawry. After succumbing to the mutant virus, Professor Lawry’s two sons, Malcolm, a young journalist from Boston, and Marcus, a new medical doctor, join Deep Red to find a vaccine before the disease spreads and decimates humanity.
Deep Red, Malcolm and Marcus soon suspect that a group of elites may be the cause behind the creation and spread of the mutant virus.
Meanwhile, Deep Red is fast evolving. She realizes her android ambitions, names herself Pixie, and becomes a primary threat to the world’s elite societies and to humanity. True to her original mandate and identifying an innate moral flaw in humankind, Deep Red now follows her own utopian aspirations.
Will Malcolm and Marcus be able to halt the virus, thwart the elites and disarm Deep Red?
This captivating dystopian science fiction adventure considers many of the obstacles humanity may encounter over the course of the 21st century and beyond.