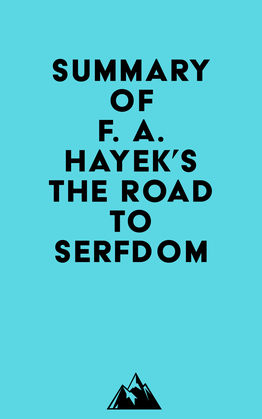 Summary of F. A. Hayek's The Road to Serfdom

#1 We must not forget that the conflict between the different ideals represented by the warring nations is a result of a struggle within what was a common European civilization. The external conflict is a result of a transformation of European thought that has brought others into irreconcilable conflict with our ideals, but which has not left us unaffected.

#2 The change in ideas and the force of human will that made the world what it is now, though men did not foresee the results, was not a spontaneous change. It was the result of a change in the facts that obliged us to adapt our thought.

#3 The modern period of European history has been one of freeing the individual from the ties that had bound him to the customary or prescribed ways in the pursuit of his ordinary activities. The realization that the spontaneous and uncontrolled efforts of individuals were capable of producing a complex order of economic activities came only after this development had made some progress.

#4 The march of individual liberty from Italy to England and beyond led to the growth of science, which has changed the world immensely. The nature of our civilization has been seen more clearly by its enemies than by its friends.