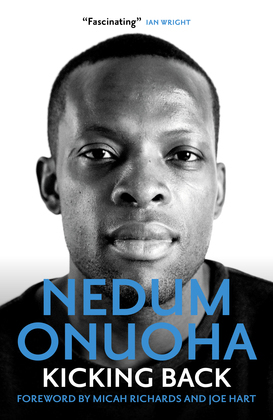 by Nedum Onuoha (Author)
Buy for $20.44 Excerpt
Nonfiction Biography & autobiography Sports Nature, recreation and sports Sports & recreation Soccer
warning_amber
One or more licenses for this book have been acquired by your organisation details

“This is a great account of the life and career of a man I respect immensely. A fascinating read.” – Ian Wright

“A searingly honest account of a fascinating football story. Nedum tells it like he played, with nothing left out.” – Guy Mowbray, Match of the Day

‘My identity is built on conflicts, and I’m proud of who I am … I can walk through the rest of my life with something to say.’

Nedum Onuoha was not a typical footballer. A young black Mancunian picked by the Manchester City Academy aged ten, he was determined to continue his education despite the lure of a career under the floodlights. Fiercely intelligent on and off the pitch, Onuoha developed into a talented defender and played his part in City’s meteoric rise. He was at the Etihad Stadium when they won their first Premier League title – as an opposition player for QPR, having left the Blues just four months earlier.

In this characteristically forthright book, Onuoha reveals what goes on behind the scenes at top-tier clubs. Stuffed with insights into household names like Stuart Pearce, Sven-Göran Eriksson, Roberto Mancini and Harry Redknapp, this is football and its most famous figures as you’ve never seen them before.

Kicking Back is also the story of one man’s search for identity: as a footballer, as a black man in England and as an outsider in the US during the 2020 Black Lives Matter protests. What is it like to receive horrific racist abuse while doing your job? And how has football utterly failed the black community? Onuoha provides a damning assessment of the sport’s authorities, finally claiming his voice as he dives deep into a life spent on the pitch.