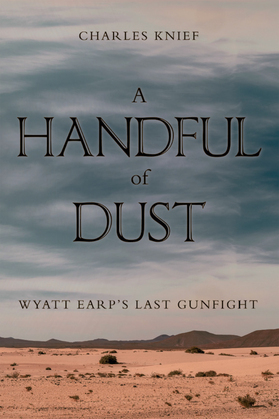 A Handful of Dust

Wyatt Earp's Last Gunfight
by Charles Knief (Author)
Buy for $6.99 Excerpt
Fiction Action & adventure Historical Westerns
warning_amber
One or more licenses for this book have been acquired by your organisation details

It has been twenty-five years since the notorious gunfight at the O.K. Corral when Wyatt Earp and his wife, Josephine, move to Los Angeles. Bringing eighty-five thousand dollars in cash and gold with them, the reward for a lot of hard work and a little bit of luck. By 1910, they are broke and on the verge of starvation, thanks to insatiable gambling habits and inadequate talents.

Now sixty-two, the Old West icon is forced to return to his career in law enforcement with the LAPD tracking bail skips. In true Wyatt Earp fashion, he creates an international incident by kidnapping two murder suspects from Mexico and bringing them back across the border while staying two steps ahead of the Mexican cavalry. When he is fired from the LAPD, he is offered a job to run off a group of trespassers from a mine in Searles Valley, California. After partnering with Bat Masterson, his friend of forty years, Wyatt has no idea that he is about to ride into the biggest gunfight of his life.

A Handful of Dust tells the exciting tale of Wyatt Earp’s final gunfight.