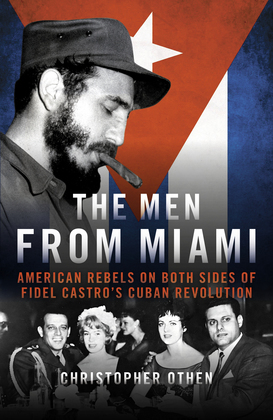 The Men From Miami

American Rebels on Both Sides of Fidel Castro's Cuban Revolution
by Christopher Othen (Author)
Buy for $20.44 Excerpt
Nonfiction History >1989 History by country South America
warning_amber
One or more licenses for this book have been acquired by your organisation details

Back in 1957, Castro was a hero to many in the USA for taking up arms against Cuba’s dictatorial regime. Two dozen American adventurers joined his rebel band in the mountains, including fervent idealists, a trio of teens from the Guantánamo Bay naval base, a sleazy ex-con who liked underage girls, and at least two future murderers. Castro’s eventual victory delighted the world – but then he ran up the red flag and some started wondering if they’d supported the wrong side.

A gang of disillusioned American volunteers – including future Watergate burglar Frank Fiorini and journalist Alex Rorke, whose 1963 disappearance remains unsolved – changed allegiances and joined the Cuban exiles, CIA agents and soldiers of fortune who had washed up in Miami ready to fight Castro’s regime by any means necessary. These larger-than-life characters wreaked havoc across the Caribbean and went on to be implicated in President Kennedy’s assassination, a failed invasion of ‘Papa Doc’ Duvalier’s Haiti and the downfall of Richard Nixon.

The Cold War had arrived in Miami, and things would never be the same again.