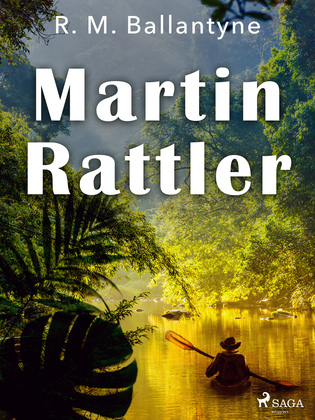 by R. M. Ballantyne (Author)
Buy for $2.99 Excerpt
Fiction Juvenile & young adult Classics Tales Fairy tales & folklore
warning_amber
One or more licenses for this book have been acquired by your organisation details

Mischievous young Martin Rattler is desperate for a life at sea. When he finds himself on board the 'Firefly' he can’t quite believe his luck, and soon falls in with young Barney O’Flannagan. There is trouble ahead however, and when the 'Firefly' is attacked by pirates the pair must make a hasty escape. They wash up in the Amazon, where they discover new plants and animals, meet new people, and have plenty of daring adventures together. A swashbuckling tale from much-loved author R.M. Ballantyne.

R.M. Ballantyne (1825-1894) was a Scottish artist and prolific author of mostly children’s fiction. Born in Edinburgh, Ballantyne was the ninth of ten children. At the age of 16 Ballantyne moved to Canada, where he worked for the Hudson’s Bay Company, travelling all over the country to trade for fur. He returned to Scotland in 1847 following the death of his father, and it was then that he began his literary career in earnest, writing over 100 children’s adventure books over the course of his life. Stories such as ‘The Coral Island’ and ‘The Young Fur Traders’ were hugely popular, and many of them drew on his own experiences of travelling throughout Canada. A stickler for detail, Ballantyne continued to travel widely to research the backgrounds and settings for his exciting stories. His tales became an inspiration for authors of the future, including ‘Treasure Island’ novelist Robert Louis Stevenson. Ballantyne spent the latter period of his life living in London and Italy for the sake of his health. He died in Rome in 1894 at the age of 68.