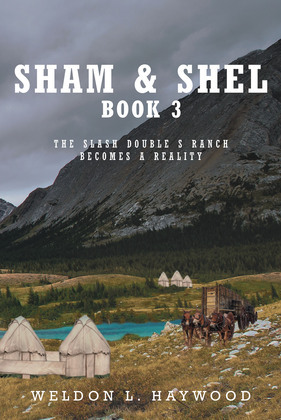 The Slash Double S Ranch Becomes a Reality
by Weldon L. Haywood (Author)
Buy for $9.99 Excerpt
Fiction Romance Western
warning_amber
One or more licenses for this book have been acquired by your organisation details

Shamrock Jones (Sham) met Shelton Johnston (Shel) when they had been traveling through the Nevada territory on their way to the Oregon territory. Sham had been traveling to take ownership of a large plot of land he had been awarded by the United States government. The land was given as compensation for Sham's extraordinary service in the Army as a sniper.

Shel, her father, and younger brother and sister had been traveling with a wagon train to begin a new life out West.

Sham met Shel when he came upon the wagon train being attacked by seven outlaws. After killing all the outlaws, Sham had been offered the job as wagon master. There was still more than a month remaining before the wagon train would reach its destination. Initially, Sham had decided to decline the offer. He changed his mind after he met Shel.

During the remaining month of the wagon train journey, the two had begun a romance they both knew would be forbidden by most onlookers. They decided not to let others destroy the deep love they felt for each other.

After reaching the wagon train's destination in a town called Lund Port, Sham and Shel had continued their romance. They explored the large land plot Sham had been awarded with Shel's younger brother and sister, Joey and Alice (the little ones), riding with them.

Read how a once-forbidden romance evolves into a humorous series of marriages, and the completed exploration evolves into a new ranch, the Slash Double S.

Now read about the adventures Sham and Shel endure in their quest to build their new ranch.