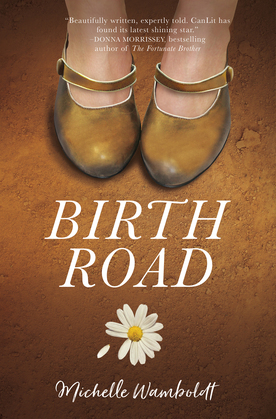 by Michelle Wamboldt (Author)
Buy for $10.99 Excerpt
Fiction Historical Contemporary women
warning_amber
One or more licenses for this book have been acquired by your organisation details

A bold and evocative work of historical fiction by a debut author that travels from rural Nova Scotia to Boston and back again, told in startling vignettes.

My mother was not one to dwell on the past. “Digging up old memories is like eating cherries,” she said. “Some people choose the sweet ones every time, and then there are the others, those who always choose the sour.”
I don’t agree with my mother. I have always liked the sweet and the sour. You really can’t appreciate one without the other. Memories are like that, too.

Told in startling vignettes and with bold, impeccable prose, Birth Road is a story of love, lost innocence, and the secrets that so often haunt small places.
Set in early twentieth-century Nova Scotia, our story follows the naive but curious Helen, as she recalls the relationships and significant moments that have led to the birth of her child. Born in the grip of poverty to a cruel mother and a gentle but absent father, Helen’s life follows a surprising path as she is moved from one place to another, constantly leaving the people she cares about behind. The love she has for her best friend Madge and her husband Edgar are tested as her journey is overshadowed by rumours and secrecy. Her loving Aunt Gertie, whose voice is like the summer rain, guides her with humour and wisdom as she grows into a woman.
Throughout it all, Helen takes in the world around her, but with an innocence that lets it break her heart over and over again. Why is Madge’s family so sad? Why does her brother hate their mother? Why have the details of her parents’ marriage been kept a secret? As Helen grows, she slowly unravels family secrets, and finds the life she’s been building is one she never expected. Moving from the woodlands of rural Nova Scotia to the city streets of Boston and back again, Birth Road is the powerful story of a woman desperate to live life on her own terms.Set in the early twentieth century, Birth Road follows the naïve but curious Helen as life carries her from rural Nova Scotia to Boston and back again, all while navigating love and loss, and the moments that have led to the birth of her child. Told in startling vignettes, this is the story of a woman desperate to live life on her own terms, no matter the pain it causes her.