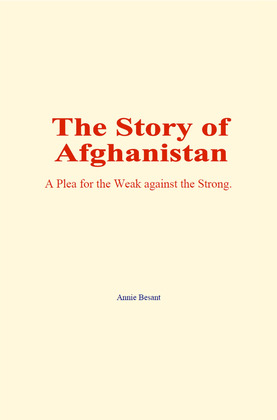 The Story of Afghanistan

A Plea for the Weak against the Strong
de Annie Besant (Autor)
Comprar por 4,99 $ Extracto
No Ficción Historia
warning_amber
One or more licenses for this book have been acquired by your organisation details

The history of English policy in Afghanistan is one which each citizen of Britain is now bound to study. No adult individual in a nation is free from responsibility of national policy — only some have votes, but all have influence. Today the hands of the citizens are in so far clean that when this Tory Government was placed in power, it was placed there for inaction, for rest, for quietude. None voted that it should embroil us in Europe, in Asia, in Africa. None chose it that it should waste our savings and embarrass our finances. None raised it that it should pour out our money as dross, nor shed human blood as water in three of the four continents of the globe. To-morrow, if England vote Tory, on England, and not on the Ministry, will rest the crimes of the last six years. England's the dishonor in South Eastern Europe if she endorse the war-with-disgrace-treaty of Berlin. England's the shame if she condone the murder of women and children in cold blood in South Africa, the slaughter of the helpless by dynamite as they crouched for shelter in the caves. England's the disgrace — and the rapidly advancing Nemesis — if she approve our broken treaties, our dishonored promises, our inhuman cruelties, touching the wronged, the betrayed, the crushed races of the mountains and valleys of Afghanistan.