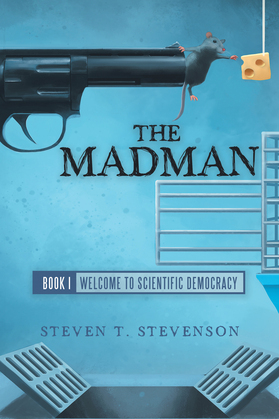 Book I Welcome to Scientific Democracy
by Steven T. Stevenson (Author)
Buy for $3.99 Excerpt
Fiction Literary Humorous
warning_amber
One or more licenses for this book have been acquired by your organisation details

In any scientific democracy, anomalies are discarded in favor of generally accepted norms established for the good of all—but what if you are the anomaly? Would you have the will to persevere and follow your destiny to the end, or would you roll over and adhere to the ever-growing list of social conventions telling you who you are?

Steven is an outsider delivered unsuspectingly into an environment controlled by impersonal and predetermined rules. Despite attempts to strip him of his identity, Steven has a sense of being different, which is not a laudable trait in this world where being different spells destruction.

Although fictional in nature, The Madman exists in the shadows of our current reality. With every new generation, the screws are tightened down further, and somehow people still find comfort in the jaws that clutch them. Fortunately, this yarn is set in a future that has not yet come, but if it does arrive someday, what would you do if faced with being an anomaly in a society that would ratherhave you discarded than permit your continued existence?