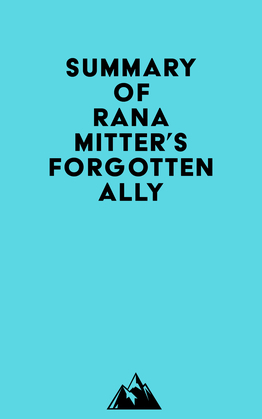 by   Everest Media (Author)
Buy for $2.99 Excerpt
Nonfiction History History by country Asia China
warning_amber
One or more licenses for this book have been acquired by your organisation details

#1 The Clash between China and Japan did not begin in 1937. It had been brewing for decades. The story of the first half of China’s twentieth century is the story of its love-hate relationship with its smaller island neighbor.

#2 The Chinese influence was at its peak during this period. The dynasty was established by ethnic Manchus who rode into the Chinese heartland from the lands of the northeast. Even though the Manchus had conquered China’s territory, they still respected China’s powerful social norms.

#3 China’s success in the eighteenth century was largely due to their small, efficient bureaucracy. But when a new threat appeared in the early nineteenth century in the form of imperialism from the West, China was forced to sign unequal treaties that gave away their sovereignty.

#4 The Treaty of Nanjing, which was signed in 1842, allowed trading rights to be granted to the trading city of Shanghai. The Qing dynasty had to rethink its entire strategy of dealing with the Western world.