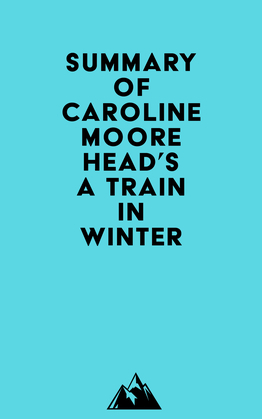 Summary of Caroline Moorehead's A Train in Winter

#1 The French were shocked by the speed of the German victory, and how young and healthy the troops looked. They were stunned by the fact that a nation whose military valour was epitomized by the battle of Verdun in the First World War and whose defences had been guaranteed by the supposedly impregnable Maginot line, had been reduced to a state of vassalage in just six weeks.

#2 The first signs of German behavior were reassuring. The French were told to respect property, and the Germans took control of the telephone exchange and the railways. The French were relieved, and handed in their weapons.

#3 The terms of the armistice, which were signed after 27 hours of negotiations in the clearing at Rethondes in the forest of Compiègne, were brutal. The German military defeat was signed at the end of the First World War in 1918, and France was now being divided up between them and the Italians.

#4 The Germans had been preparing for the occupation of France for quite some time. They had prepared a thousand railway officials to supervise the running of the trains, and they had prepared a group of twenty men to infiltrate and interrogate.