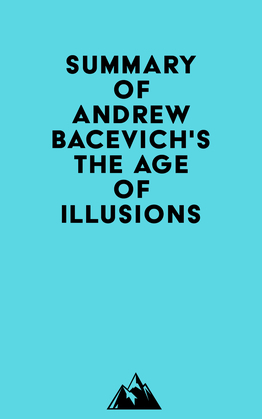 Summary of Andrew Bacevich's The Age of Illusions

by   Everest Media (Author)
Buy for $2.99 Excerpt
Nonfiction History History by country United States
warning_amber
One or more licenses for this book have been acquired by your organisation details

#1 Trump and I, in another sense, were born in 1946. We were both governed by certain identifiable propositions that defined a way of life for Americans.

#2 The Best Years of Our Lives is a film that depicts American freedom at its point of origin, when verities still had a semblance of permanence. It reassured audiences that despite the recent upheavals, nothing essential had changed.

#3 The America depicted in The Best Years of Our Lives, however, was not real. The flocking to see the movie when it was first released believed otherwise. World War II remained a fixed point of reference to preserve what the nation had won.

#4 The Boone City residents were just a small sample of the American policy elite who were already insisting that the United States could not afford to rest on its laurels. The struggle for freedom was only just beginning, and the United States had to take the lead in opposing Soviet totalitarianism.