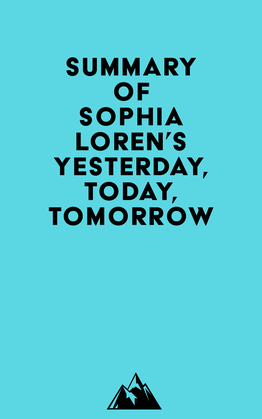 #1 Romilda Garbo, the woman who would become my mother, met my father, Riccardo Scicolone Murillo, in 1933. They fell in love, and she became pregnant. But when he found out that she was pregnant, he grew cold toward her.

#2 I was born on September 20, 1934, in Rome, Italy. I was frail and not particularly pretty. My mother, Romilda, was terrified that I’d be switched with another baby. So she bought a train ticket and took me back home with her.

#3 The apartment was small, but it seemed to expand like an accordion to fit us all in. Our family of seven had grown. My mother, to earn a penny or two, would play in the cafés and trattorie of Pozzuoli and Naples.

#4 I was very shy, and I lived my life as best I could behind a thin yet sturdy veil of shyness. I was afraid of being teased, and I would enter the classroom first or last, after the other students were already in class. I was neat and diligent, but not at ease with the other children.