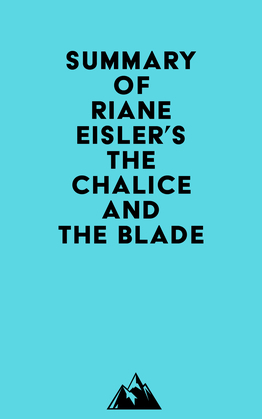 Summary of Riane Eisler's The Chalice and the Blade

by   Everest Media (Author)
Buy for $2.99 Excerpt
Nonfiction Health & fitness Daily living Motherhood
warning_amber
One or more licenses for this book have been acquired by your organisation details

#1 The Paleolithic art of the humans of the Paleolithic era was a sacred tradition that was related to the will to live. It was a record of their awe at the mystery of life and death, and it indicated that very early in human history, the human will to live found expression through a variety of rituals and myths.

#2 The idea that Paleolithic art was only created by male hunters is not based on any factual evidence. It is the result of scholarly preconceptions, which are in contrast with the findings of modern gathering-hunting societies.

#3 The evolutionary model of man the hunter-warrior has colored most interpretations of Paleolithic art. But as more scholars were secular scientists rather than monks like Abbé Breuil, some began to question tenets once accepted by the scholarly establishment.

#4 The first art that humans produced was crude and undeveloped, but it was far more than that. It was an expression of the psychic traditions of the people who created it, and it reflected their understanding of the world.