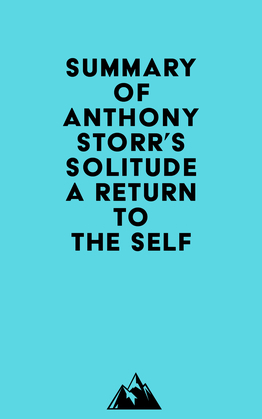 Summary of Anthony Storr's Solitude a Return to the Self

by   Everest Media (Author)
Buy for $2.99 Excerpt
Nonfiction Health & fitness Self-help
warning_amber
One or more licenses for this book have been acquired by your organisation details

#1 The emphasis on intimate interpersonal relationships as the touchstone of health and happiness is a relatively recent phenomenon. Earlier generations would not have rated human relationships so highly, believing that the daily round should provide all we need to ask.

#2 Psycho-analysis has changed over the last century, and now emphasizes the importance of the patient’s relationship with the psychoanalyst. The theory of sexual development, from infancy onward, which Freud postulated as a consequence of his investigations, is the foundation of the edifice of psycho-analysis.

#3 Freud believed that neurosis originated from the circumstances of a patient’s early childhood. The task of the psycho-analyst was to facilitate the recall of traumatic memories, which had been repressed because they were painful or shameful.

#4 Freud originally believed that transference was a curse, but over time he realized that it was the key to his patients’ healing. Today, most forms of psychotherapy are focused on helping patients fix their relationships with other people.