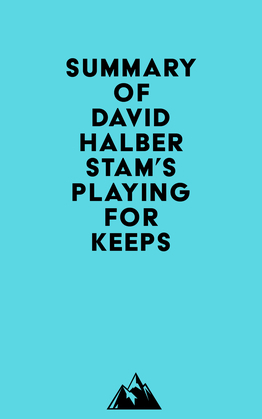 by   Everest Media (Author)
Buy for $2.99 Excerpt
Nonfiction Biography & autobiography Sports
warning_amber
One or more licenses for this book have been acquired by your organisation details

#1 The Bulls’ games in Paris were not very good, and they lost the Final to Olympiakos Piraeus. However, the tournament was a reflection of the growing internationalization of the sport, and a celebration of the NBA’s connection with McDonald’s, one of America’s blue-chip companies.

#2 Ebersol and Stern were very close, and it was Ebersol’s company that determined which images went out to the nation. Ebersol understood that image was more important than reality in their business.

#3 In the wake of the last game of the 1997-1998 season, a black man named Micheal Ray Richardson came to David Stern and told him that if it hadn’t been for him, he would have kept on using. He was clean now.

#4 Michael Jordan was the most popular athlete in the nineties. He was well-known and well-liked by millions of people around the world. He was the most talented and charismatic athlete, and he was also the most successful.