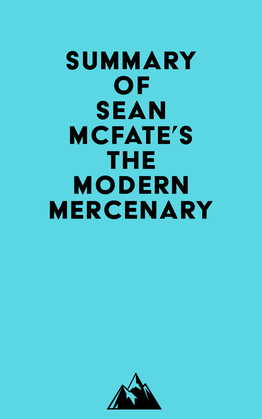 by   Everest Media (Author)
Buy for $2.99 Excerpt
Nonfiction Business & economics Industries
warning_amber
One or more licenses for this book have been acquired by your organisation details

#1 In 2008, I was asked to participate in a plan to stage an armed intervention in Darfur. I believed Blackwater could stage a humanitarian intervention for days or even weeks, and I suggested other options for Greystone that included training Darfurians or African Union peacekeepers to defend against Sudanese aggression.

#2 The plan was to send Blackwater to Darfur to help the Janjaweed militias stop the genocide, but the risks outweighed the benefits. In the future, individuals and organizations might overcome such reservations and retain more aggressive PMCs to do their bidding.

#3 A free market for force would be closer than many think. As the consumer-in-chief, the United States wields market power to shape private military business practices and norms. As the demand for security in an insecure world increases, supply will expand as emerging firms offer greater combat-oriented possibilities.

#4 The future marketplace will be hot spots and conflict zones, such as the Middle East, Latin America, and Africa, because demand for security is high there. Yet introducing an industry vested in conflict into the most conflict-prone places on earth is perplexing, given the possible consequences for the people who live there.