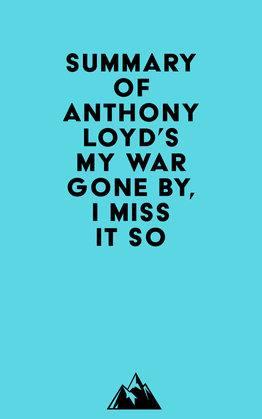 Summary of Anthony Loyd's My War Gone By, I Miss It So

by   Everest Media (Author)
Buy for $2.99 Excerpt
Nonfiction History
warning_amber
One or more licenses for this book have been acquired by your organisation details

#1 The two sides of the tower visible from our position never changed their appearance: the front was a wide expanse of black and twisted window frames, the southern side a concrete Emmental of shellholes from tanks. The Serbs shot it to ribbons the next morning.

#2 I knew if I went to Bosnia, I would not have much money with me, so I asked the Serb restaurant in Notting Hill if anyone could teach me Serbo-Croatian. A beautiful girl named Mima agreed to teach me the rudiments of her language.

#3 I was left to face the full responsibility of my own actions. I was not given a contract, so I had no aim other than to go to war using journalism as an open-ended ticket to remain in Bosnia as long as I wanted.

#4 I was in Sarajevo, and the war was the best thing that could have happened to the Holiday Inn. It had given the hotel a token vestige of character, and it was safe enough to stay in.