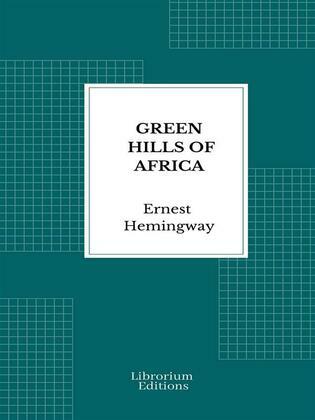 by Ernest Hemingway (Author)
Buy for €1.49 Excerpt
Nonfiction Biography & autobiography Artists, architects, photographers Historical
warning_amber
One or more licenses for this book have been acquired by your organisation details

We were sitting in the blind that Wanderobo hunters had built of twigs and branches at the edge of the salt-lick when we heard the motor-lorry coming. At first it was far away and no one could tell what the noise was. Then it was stopped and we hoped it had been nothing or perhaps only the wind. Then it moved slowly nearer, unmistakable now, louder and louder until, agonizing in a clank of loud irregular explosions, it passed close behind us to go on up the road. The theatrical one of the two trackers stood up.

I put my hand to my mouth and motioned him down.

‘It is finished,’ he said again and spread his arms wide. I had never liked him and I liked him less now.

‘After,’ I whispered. M’Cola shook his head. I looked at his bald black skull and he turned his face a little so that I saw the thin Chinese hairs at the corners of his mouth.