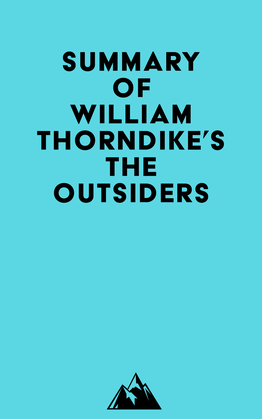 Summary of William Thorndike's The Outsiders

de   Everest Media (Autor)
Comprar por 3,99 $ Extracto
No Ficción Comercio y Economía Liderazgo
warning_amber
One or more licenses for this book have been acquired by your organisation details

#1 The difference between the strategies of Murphy and Paley was that Murphy’s goal was to make his company more valuable, while Paley’s goal was to make CBS larger. Murphy’s peers at other media companies did not follow this path, but instead tended to follow fashion and diversify into unrelated businesses.

#2 Roll-ups are a type of acquisition in which a company acquires a series of businesses, attempts to improve operations, and then keeps acquiring, benefiting over time from scale advantages and best management practices. This concept came into vogue in the mid- to late 1990s and flamed out in the early 2000s as many of the leading companies collapsed under the burden of too much debt.

#3 Murphy was a product manager for consumer packaged goods giant Lever Brothers in New York City, until he decided to move to Albany and buy a struggling UHF TV station in 1954. He turned it into a cash generator by improving programming and aggressively managing costs.

#4 Murphy was CEO of Capital Cities from 1967 to 1980. He bought several small dailies in the early 1970s, and in 1974 bought the Fort Worth Telegram and the Kansas City Star. In 1984, he bought the ABC Network and its broadcasting assets.