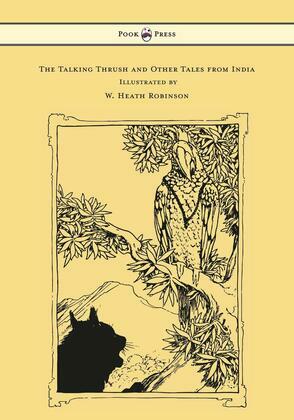 The Talking Thrush and Other Tales from India - Illustrated by W. Heath Robinson

This gorgeous book is a collection of 43 Indian folk-tales superbly illustrated by W. Heath Robinson. These tales were originally collected by William Crooke but are retold here by W. D. Rouse to delight children. Rouse has chosen to keep this selection confined to the Beast Stories which are particularly interesting as being mostly indigenous and little affected by so-called Aryan influence. Any changes made by Rouse have been included in a notes section which also include the sources of each tale alongside a few obvious parallels or references to literature of the subject.

Tales include: The Talking Thrush, The Judgment of the Jackal, The Camel’s Neck, The Foolish Wolf, The Grateful Goat, The King of Mice, The Bull and the Bullfinch and many more.

These wonderful tales are accompanied by many beautiful and intricate black and white illustrations by W. Heath Robinson. An English cartoonist and illustrator, best known for drawings of ridiculously complicated machines – for achieving deceptively simple objectives. Such was (and is) his fame, that the term ‘Heath Robinson’ entered the English language during the First World War, as a description of any unnecessarily complex and implausible contrivance.

Originally published in 1899, we are now republishing it here as part of our ‘Pook Press’ imprint, celebrating the golden age of illustration in children’s literature.