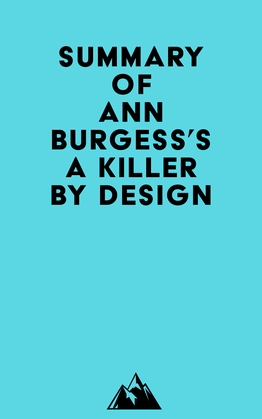 Summary of Ann Burgess's A Killer by Design

#1 I was drawn to the psychiatric units at Spring Grove State Hospital, because I realized that the majority of the women there had been victims of sexual assault. They had been attacked, and then forced to manage the trauma on their own, silently, or face the likely consequence of being blamed for instigating their own assault.

#2 I began interviewing patients in the psychiatric ward, focusing on the male patients who had committed serious offenses such as sexual assault or rape. I wanted to know how they thought about their crimes and their victims.

#3 I was interested in studying the psychology of rape, sexual assault, and sexual violence, and I wanted to change the cultural perception that served to enable their proliferation. I quit my job to start a new career in academics.

#4 The importance of control was shown to me by my male patients at Spring Grove State Hospital. Control caused stigma, and stigma kept the problem strictly buttoned up.