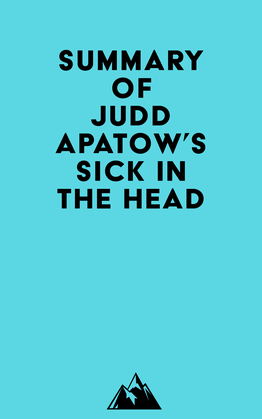 Summary of Judd Apatow's Sick in the Head

by   Everest Media (Author)
Buy for $3.99 Excerpt
Nonfiction Humor Form Anecdotes
warning_amber
One or more licenses for this book have been acquired by your organisation details

#1 I met Adam Sandler when I was in my early twenties. He was known at that time as the stud man from the MTV game show Remote Control. He was an extremely original and gifted comedian. I knew that Adam was going to rule comedy one day.

#2 Judd and Charlie were roommates when they moved to Los Angeles. Judd went to USC cinema school for a year and a half, and then he ran out of money and interest. He began working at the Improv in Los, and then he moved to L. A. and became friends with Adam.

#3 Judd Apatow wanted to make a movie with Adam Sandler, and he wanted to make it personal because they knew each other so well. He wanted to tap into the comedians’ world he had learned about in his notebook.

#4 Judd’s idea was to write a movie about a man who is sick with a terminal illness and how he realizes that he is more comfortable being sick than when he gets better. He wanted to fabricate something and then let the emotional life of the movie rule the day.