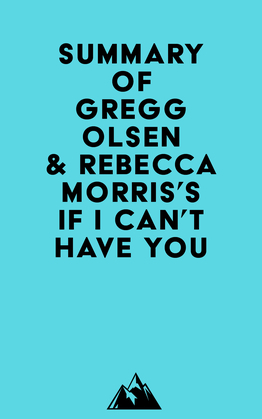 Summary of Gregg Olsen & Rebecca Morris'sIf I Can't Have You

de   Everest Media (Autor)
Comprar por 3,99 $ Extracto
No Ficción Actualidad y reportajes Crimenes verdaderos
warning_amber
One or more licenses for this book have been acquired by your organisation details

#1 On Monday, December 7, 2009, Debbie Caldwell went to visit her friend and neighbor Susan Powell, who was usually prompt and conscientious with the children she took care of. However, when no one answered the door, Debbie phoned the names of the children’s emergency contacts.

#2 On March 6, Terri Powell, Josh's mother, heard the message from his day care provider, Debbie Caldwell. She and Jennifer went to the house to find it locked up tightly. They tried both Josh and Susan's cell phones, which went to voice mail. They then phoned the West Valley City police to report the family missing.

#3 The police issued a statewide attempt-to-locate for the Powell family’s 2005 light blue Chrysler Town Country minivan. They had not heard from Susan or Josh, and it was strange that neither had called their places of employment or day-care provider to say they would be away.

#4 The Powell family was missing, and word spread among friends and church members that they were missing. In the afternoon, Kiirsi sent a text message to JoVonna Owings, who knew Susan from the church choir.