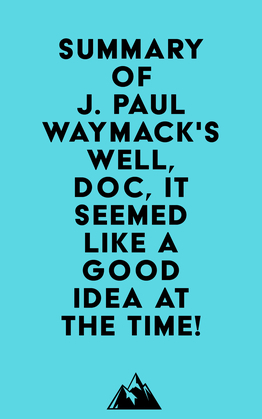 Summary of J. Paul Waymack's Well, Doc, It Seemed Like a Good Idea At The Time!

by   Everest Media (Author)
Buy for $3.99 Excerpt
Nonfiction Humor Topic Business & professional
warning_amber
One or more licenses for this book have been acquired by your organisation details

#1 I was a third-year medical student on rotation in the emergency room at Riverside Hospital. I was introduced to the doctors’ lounge, and saw a film hanging on one of the viewing boxes. It was an X-ray of an abdomen, with a crystal-clear image of a metal flashlight. I had never seen anything like it.

#2 As a third-year med student, I was about to walk into a room and see a patient. I was extremely nervous, but I tried to act like a doctor. I was so nervous that I failed to notice that all four appendages were in full leather restraints.

#3 The head doctor at the hospital where I was a third-year medical student asked me what seemed to be the problem with my patient. I replied that I didn’t know, but that he might be on drugs. The director then explained the symptoms of delirium tremors, which included hallucinations, loss of touch with reality, and many physiologic changes including a rapid pulse and a lot of perspiring.

#4 I spent the next half-hour reading about DTs, then went off to see a series of sore throats, backaches, and flu cases. These were the kinds of maladies I had expected to see in practice, before the third year of medical school kicked me into reality.