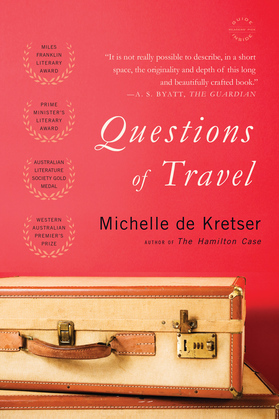 Questions of Travel: A Novel

by Michelle de Kretser (Author)
Excerpt
Fiction Literary Australian, Pacific, Oceanian and Polynesian literature Australian literature
warning_amber
One or more licenses for this book have been acquired by your organisation details
Laura Fraser grows up in Sydney, motherless, with a cold, professional father and an artistic bent. Ravi Mendis lives on the other side of the globe -- exploring the seductive new world of the Internet, his father dead, his mother struggling to get by.Their stories alternate throughout Michelle de Kretser's ravishing novel, culminating in unlikely fates for them both, destinies influenced by travel -- voluntary in her case, enforced in his.

With money from an inheritance, Laura sets off to see the world, eventually returning to Sydney to work for a publisher of travel guides. There she meets Ravi, now a Sri Lankan political exile who wants only to see a bit of Australia and make a living. Where do these two disparate characters, and an enthralling array of others, truly belong? With her trademark subtlety, wit, and dazzling prose, Michelle de Kretser shows us that, in the 21st century, they belong wherever they want to and can be -- home or away. "It is not really possible to describe, in a short space, the originality and depth of this long and beautifully crafted book." -- A.S. Byatt, The Guardian
Format
EPUB
Protection
DRM Protected
Publication date
May 14, 2013
Publisher
Little, Brown and Company
Page count
480
ISBN
9780316219242
Paper ISBN
9780316219228
Awards
Miles Franklin Award 2013
485936
item