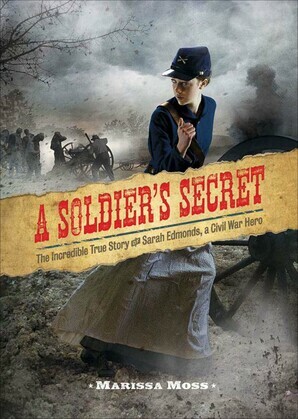 by Marissa Moss (Author)
Excerpt
Fiction Juvenile & young adult Historical Civil War period (1850-1877)
warning_amber
One or more licenses for this book have been acquired by your organisation details
Historical fiction at its best, this novel by bestselling author Marissa Moss tells the story of Sarah Emma Edmonds, who masqueraded as a man named Frank Thompson during the Civil War. Her adventures include serving as a nurse on the battlefield and spying for the Union Army, and being captured by (and escaping from) the Confederates. The novel is narrated by Sarah, offering readers an in-depth look not only at the Civil War but also at her journey to self-discovery as she grapples with living a lie and falling in love with one of her fellow soldiers.
Using historical materials to build the foundation of the story, Moss has crafted a captivating novel for the YA audience. The book includes a Civil War timeline, archival photos, a glossary of names, a detailed note on sources, and a new readers guide.
Format
EPUB
Protection
DRM Protected
Publication date
September 15, 2012
Publisher
Amulet Books
Page count
400
ISBN
9781613123676
Paper ISBN
9781419704277
File size
4.71 MB
493347
item