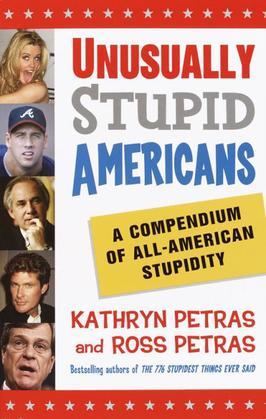 by Kathryn Petras (Author), Ross Petras (Author)
Excerpt
warning_amber
One or more licenses for this book have been acquired by your organisation details

A hilarious collection of lists, statistics, news items, quotations, and facts detailing stupid acts of Americans from all walks of life—by the authors of the bestselling The 776 Stupidest Things Ever Said

Everyone knows that America is “the land of the free and the home of the brave,” but sometimes that means we’re free to be as bravely stupid as we want! In Unusually Stupid Americans, Kathryn Petras and Ross Petras assemble choice bits of stupidity, U.S.A.-style, including

•the top seriously flawed American advertising moments, including Pacific Airlines’ brilliant “You’re scared of flying? So’s our pilot!” ad campaign, which led the airline to bankruptcy within two months of the campaign’s inception

•the Martin Luther King, Jr., celebration in Florida, where a plaque was un-veiled that was intended to honor the actor James Earl Jones but instead read, “Thank you James Earl Ray for keeping the dream alive” (an unfortunate slip-up, as James Earl Ray was King’s assassin)