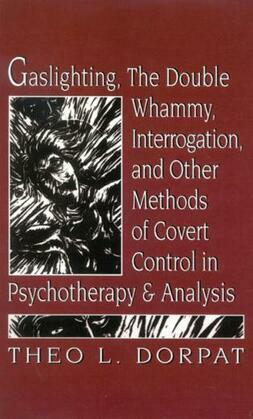 Gaslighthing, the Double Whammy, Interrogation and Other Methods of Covert Control in Psychotherapy and Analysis

by Theodore L. Dorpat (Author)
Buy for $102.50 Excerpt
Nonfiction Human science Psychology Applied psychology Research & methodology
warning_amber
One or more licenses for this book have been acquired by your organisation details

In treatment, the psychotherapist is in a position of power. Often, this power is unintentionally abused. While trying to embody a compassionate concern for patients, therapists use accepted techniques that can inadvertently lead to control, indoctrination, and therapeutic failure. Contrary to the stated tradition and values of psychotherapy, they subtly coerce patients rather than respect and genuinely help them.

The more gross kinds of patient abuse, deliberate ones such as sexual and financial exploitation, are expressly forbidden by professional organizations. However, there are no regulations discouraging the more covert forms of manipulation, which are not even considered exploitative by many clinicians. In this book, noted psychiatrist Theo. L. Dorpat strongly disagrees. Using a contemporary interactional perspective Dorpat demonstrates the destructive potential of manipulation and indoctrination in treatment.

This book is divided into three parts. Part I explores the various ways power can be abused. Part II examines eleven treatment cases in which covert manipulation and control either caused analytic failure or severely impaired the treatment process. Cases discussed include the analyses of Dora and the Wolf Man by Freud, the two analyses of Mr. Z by Kohut, as well as other published and unpublished treatments. An interactional perspective is used to examine the harmful short- and long-term effects of using indoctrination methods as well as to unravel conscious and unconscious communications between therapists and patients that can contribute to manipulations. Part III shows readers how to work using a non-directive, egalitarian approach in both psychoanalytic psychotherapy and psychoanalysis.