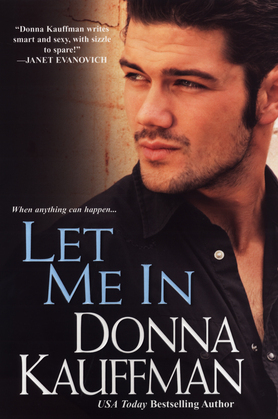 by Donna Kauffman (Author)
Buy for $11.90 Excerpt
Fiction Romance Contemporary
warning_amber
One or more licenses for this book have been acquired by your organisation details

He's bringing anything but peace and quiet. . .

Tate Winslow is done with all the guns, the adventures, the brushes with death. All she wants is to be left alone. So when her enigmatic ex-boss shows up on her doorstep barely alive, she really tries not to care. He's all alpha male, the baddest of the bad--and a threat to her hard-won peace in more ways than one.

Tate is the only lead Derek Cole has on a case that could blow the intelligence world apart--if it doesn't kill him before he can figure it out. She was his best agent, but she's in hiding and he's gone rogue, and he's starting to think of her in a very nonprofessional way. In fact, he wants Tate like he wants his next breath, but he's already risking his life and his career. . .does he need to put his heart in danger too?