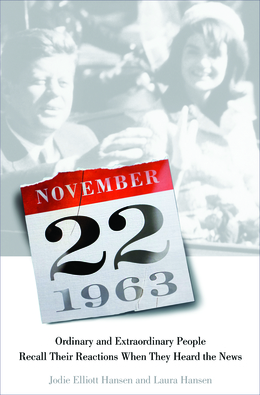 November 22, 1963: Ordinary and Extraordinary People Recall Their Reactions When They Heard the News…

An extensive collection of intimate accounts from average citizens and celebrities alike, reflecting on John F. Kennedy's assassination for the fiftieth commemoration of the tragic event

November 22, 1963 -- any American alive that day can pinpoint exactly where they were when they heard that President John F. Kennedy had been shot. Jodie Hansen, as shocked and horrified as the rest of the nation, channeled her grief into a fascinating project. From 1978 to 1983 she sent thousands of queries asking both famous and ordinary citizens for their memories of those dark, confusing days. She and daughter Laura Hansen have collected the responses she received into a stunning and poignant time capsule: November 22, 1963.

With dozens of unique and notable voices, November 22, 1963 offer a rare narrative of John F. Kennedy's assassination and its impact on America and the world. Assembled fifteen years after the event, Hansen was shocked by the outpouring of responses she received. Hollywood stars Bob Hope and Mary Tyler Moore wrote back, as did Arthur Miller, Julia Child, Indira Gandhi, Princess Grace of Monaco, George and Barbara Bush, Ronald and Nancy Reagan, Michael Crichton, and even the deranged Charles Manson.

Their stories weave together the personal and the political, the ordinary and the extraordinary for a rich and unforgettable portrayal of a nation's shared tragedy. November 22, 1963 provides a kaleidoscopic portrait of this defining moment that reaches across generations.