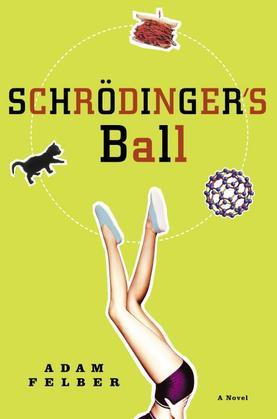 “Tender, hilarious, and packed with delightful surprises . . . If Einstein and John Cleese had written a novel together, this would be it.”–Joseph Weisberg, author of 10th Grade

Four friends set out into the night in Cambridge, Massachusetts, undeterred by the fact that one of them might actually be dead. Deb has perfected the half-hour orgasm. Grant, a geek, desperately desires Deb. Depressed Arlene has just improbably slept with Johnny, their leader, who recently and accidentally shot himself to death.

But is he (or anyone) alive or dead until he’s observed to be by someone else? Maybe not, according to Dr. Erwin Schrödinger, the renowned physicist (1887—1961) who is, strangely, still ambling through the Ivy League town, offering opinions and proofs about how our perceptions can bring to life–and, in turn, reduce and destroy–other people and ourselves. And what does Schrödinger have to do with the President of Montana, who just declared war on the rest of the country, or the Harvard Square bag lady who is rewriting the history of the world? What’s the significance of the cat in the box, the “miracle molecule,” or the discarded piece of luncheon meat?

Answer: All will collide by the end of this hypersmart, supersexy, madly moving novel that crosses structural inventiveness with easygoing accessibility, the United States with our internal states of being, philosophy with fiction. In Adam Felber’ s dazzling debut, science and humanity collide in a kaleidoscopic story that is as hilarious as death and as heartbreaking as love.