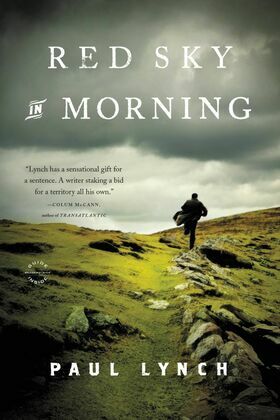 Red Sky in Morning: A Novel

by Paul Lynch (Author)
Excerpt
Fiction Literary English literature Irish literature
warning_amber
One or more licenses for this book have been acquired by your organisation details
A tense, thrilling debut novel that spans two continents, from "a writer to watch out for" (Colum McCann).

It's 1832 and Coll Coyle has killed the wrong man. The dead man's father is an expert tracker and ruthless killer with a single-minded focus on vengeance. The hunt leads from the windswept bogs of County Donegal, across the Atlantic to the choleric work camps of the Pennsylvania railroad, where both men will find their fates in the hardship and rough country of the fledgling United States.

Language and landscape combine powerfully in this tense exploration of life and death, parts of which are based on historical events. With lyrical prose balancing the stark realities of the hunter and the hunted, Red Sky in Morning is a visceral and meditative novel that marks the debut of a stunning new talent.
Format
EPUB
Protection
DRM Protected
Publication date
November 05, 2013
Publisher
Little, Brown and Company
Page count
288
ISBN
9780316230247
Paper ISBN
9780316230254
File size
1 MB
630836
item