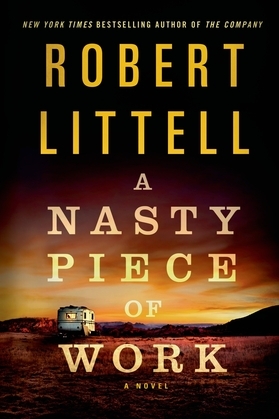 A Nasty Piece of Work

Former CIA agent Lemuel Gunn left the battlefield of Afghanistan for early retirement in the desert of New Mexico, where he works as a private investigator from the creature comforts, such as they are, of a mobile home.

Into his life comes Ornella Neppi, a thirty-something woman making a hash out of her uncle's bail bonds business. The source of her troubles, Emilio Gava, was arrested for buying cocaine. Ornella has reason to believe he is planning to jump bail. Unless she can find him, her uncle is going to be $125,000 out of pocket.
For $95-a-day plus expenses (not to mention the pleasure of her company), Gunn agrees to help Ornella track the wayward suspect down. Curiously, no photographs of Gava seem to exist. Once Gunn begins his manhunt, he starts to wonder whether Gava himself existed in the first place.
Robert Littell has been widely praised as one of the best espionage writers of our time. Now, he's turned his formidable skills toward crime fiction in A Nasty Piece of Work, a novel that Le Monde has already praised as "one of those page-turning detective tales that feels like an instant classic.… A Chandleresque noir novel, as delightful as it is suspenseful."