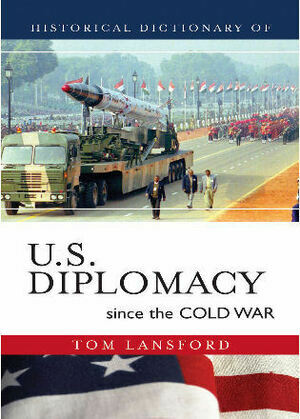 Historical Dictionary of U.S. Diplomacy since the Cold War

by Tom Lansford (Author)
Excerpt Buy for $116.50
Nonfiction History Other
warning_amber
One or more licenses for this book have been acquired by your organisation details

The post-Cold War diplomacy of the United States evolved in stages that reflected changes in the international system. Through the 1990s, the nation's foreign affairs were marked by an evolution away from the post-World War II focus on security and superpower competition to a more multifaceted and nuanced series of policies that included economic concerns, social and cultural issues, and environmental matters. However, an escalating series of terrorist attacks that culminated in the 11 September 2001 strikes on New York and Washington, D.C. led to the reemergence of security as the main foreign policy issue for the United States. The subsequent American-led 'war on terror' mirrored the Cold War in its goals, and the administration of President George W. Bush endeavored to build a multinational counterterrorism coalition that paralleled the Western alliance of the bipolar era. The Historical Dictionary of U.S. Diplomacy Since the Cold War is a concise overview of the main figures, conflicts, events, and policies of the United States in the post-Cold War era. The study explores the main elements of U.S. foreign policy and the regional and international reaction to American policies from the presidency of George H. W. Bush to that of George W. Bush. Through its entries, the book analyzes the underlying themes of U.S. diplomacy and the new policies formulated and implemented in response to broad changes in global politics. The book includes a chronology of events from 1991 to 2007, an introduction that highlights important themes of the era, cross-referenced entries on significant topics, a detailed bibliography, and appendixes of major documents. The work is ideal for both public and academic libraries, the general public, or the specialist looking for a reference tool in this area.