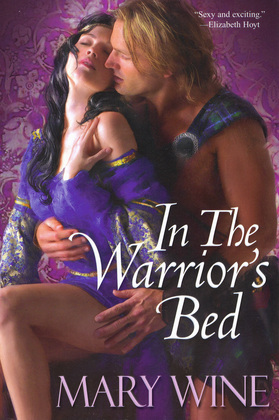 In The Warrior's Bed

by Mary Wine (Author)
Buy for $11.90 Excerpt
Fiction Romance Historical
warning_amber
One or more licenses for this book have been acquired by your organisation details
The irresistible follow-up to In Bed with a Stranger is “a Scottish romance that packs a powerful feel . . . lively, historically crafted and riveting!!” (Addicted to Romance)

Cullen McJames will not have his honor sullied, certainly not by his clan's nemesis Laird Erik McQuade. So when McQuade tells the Court of Scotland that Cullen has stolen his daughter's virtue, Cullen steals the daughter instead.

Since his brother wed a fetching lass, Cullen's been thinking he too needs a wife. A marriage could end the constant war between the clans. And looking on Bronwyn McQuade but once has put her in his dreams for a week . . .

But Bronwyn won't go quietly. She won't be punished for what she did not do. Nor is she eager to live among the resentful veterans of McQuade wars. And however brave and beautiful a man Cullen may be, he has much to learn about a woman's fighting spirit. But as Bronwyn will discover, he has much to teach her as well . . .

Praise for Mary Wine and her novels

“My kind of historical! . . . sweeps you into the time period without taking a thing away from delightful characters and a charming romance . . . definitely a must-read.” —Heather Graham, New York Times bestselling author