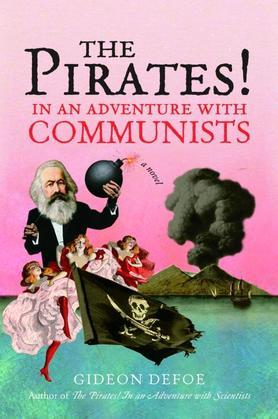 The Pirates! In an Adventure with Communists: A Novel

London, 1840: Wagner's latest opera plays to packed houses while disgruntled workers gather in crowded pubs to eat ice cream and plan the downfall of the bourgeoisie. Meanwhile, the Pirate Captain finds himself incarcerated at Scotland Yard, in a case of mistaken identity.

Discovering that his doppelgänger is none other than Karl Marx, the Captain and his crew are unwittingly caught up in a sinister plot that involves intellectual giants, enormous beards, and a quest to discover whether ham might really be the opium of the people.

Includes, at no additional charge, The Wit and Wisdom of the Pirate Captain—a Major Philosophical Work.

On the Matter of Love:
If you're off to fight in a battle, snap a ship's biscuit in half and give your girlfriend the other half. When you meet again, they will match—like two halves of a single soul! Hopefully, this will stop her sleeping with other men.

On Life in General:
Life is like a big shanty. Everything will be fine so long as everyone sings in harmony. But if someone plays a duff note on the accordion or tries to break-dance at a sensitive bit, then there will be all sorts of trouble, mark my words.