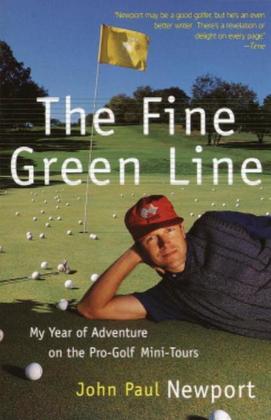 The Fine Green Line: My Year of Golf Adventure on the Pro-Golf Mini-Tours

What happens when a man leaves home for a year to pursue his dream?

One day, playing a particularly spectacular round of golf, husband and father John Paul Newport suddenly tastes what it?s like to be a pro. Deciding to take a year off and hit the road playing golf's mini-tour circuit, Newport embarks on a wild trip through America's fairways. Over the course of his journey inside the somewhat shady, often hilarious underbelly of professional golf, he uncovers a world of people so totally addicted to golf, to the delusion of achievable perfection, that they sacrifice everything else to the quest. He also discovers the nature of his own obsession with the game, and how this constant pursuit of perfection on the golf course reflects the same challenges and frustrations one encounters in life. What does it take to master such an intricate, unpredictable game? In golf, as in life, why is one so consistently incapable of acting up to one's clearly established potential?

As Newport struggles to cross that Fine Green Line--the infinitely subtle yet critical difference between the top golf professionals and those who never quite make it--he realizes that life, like golf, doesn't let you get away with anything. This is a story about letting go of fear, facing challenges, and embracing risks--a compelling personal journey that captures many of the frustrations and elations of midlife both on and off the course.