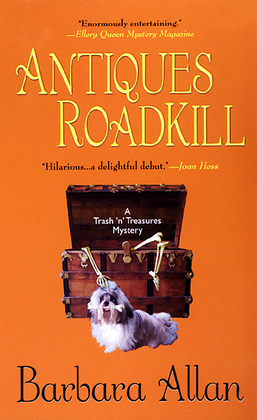 Trash 'n' Treasures Mystery #1
by Barbara Allan (Author)
Buy for $9.99 Excerpt
Fiction Mystery & detective Women sleuths English literature American and Canadian literature
warning_amber
One or more licenses for this book have been acquired by your organisation details
A con artist meets his end on a country road—and a lot of swindled senior citizens are suspects: “Hilarious…a delightful debut.”—Joan Hess

Determined to make a new start in her quaint hometown on the banks of the Mississippi, Brandy Borne never dreams she'll become the prime suspect in a murder case. . .

Moving back in with her eccentric, larger-than-life mother, Brandy Borne finds small-town Serenity, Iowa, anything but serene. It seems an unscrupulous antiques dealer has swindled Vivian out of the family's heirlooms. But when he is found run over in a country lane, Brandy becomes Murder Suspect Number One--with her mother coming in a very close second. . .

The list of other suspects is impressive--the victim's business seems to have been based on bilking seniors out of their possessions. And when the Borne "girls" uncover a few very unsavory Serenity secrets, they become targets for a murderer whose favorite hobby seems to be collecting victims.